A version (edited by Liz Clarke) of a letter read to the Leverage Points conference plenary on Friday 8 February, Lueneburg, Germany.

I am an activist. I get things done on the ground in the place where I live, South Devon in England. My colleague Jane Brady and I spent the last part of a small grant to come and be at the Leverage Points 2019 conference. At the end of the first day I felt so frustrated at being on the outside of the conversations. Then on the final morning I woke up with two clear thoughts. One was a song to the earth that I sing in my choir that goes “I feel your heart beat under my feet”. The other was the compulsion to write this letter to you.

I know where my leverage points are. In the UK they are Brexit, austerity, the decline of public services, the growing space for action arising from civil society, the frustration of young people and above all climate change. As Naomi Klein said: “This changes everything”. Climate change and the fear and not knowing associated with it are the biggest leverage point we have.

So, on behalf of all activists (and I think we were a bit rare here at the leverage points conference) I am making a plea: we need your expertise to come across and roll up its sleeves and help us pull on that lever together. I am going to suggest some ways to do that, but first I want to honour the inspiration of Donella Meadows in the work we are doing at the Bioregional Learning Centre, as she gave us the blueprint.

When Donella Meadows co-founded the Balaton Group in 1982 she had been wrestling with the imperative, in her own words, of:

“Helping people and cultures all over the world develop and express their own capacity to solve their own problems, consistent with their own needs and with the ecosystems around them. And doing that through enhancing the power within all cultures and peoples to combine intellectual knowing and intuitive knowing, reasoning about the earth and living in consonance with it.”

And then a vision started to form in her mind, again in her own words:

“… of a number of centers where information and models about resources and the environment are housed. There would need to be many of these centers, all over the world, each one responsible for a discrete bioregion.

They would contain people with excellent minds and tools, but they would not be walled off, as scientific centers so often are, either from the lives of ordinary people or from the realities of political processes. The people in these centers would be at home with farmers, miners, planners, and heads of state and they would be able both to listen to, and talk to, all of them.”

I believe that is the work we now need to turn our heads and hands to, as well as our hearts. Place is the only locale in which change happens. Our local places need us now so that they can become the learning regions for long-term climate resilience of which Donella Meadows wrote.

Civil society and policy makers need to access the peer-reviewed papers that you publish so that they can make informed decisions about how to prepare for the future. Speak to them in a language that they can understand. Show them how to get behind the pay walls and interrogate what they find.

Stop being so polite. Use your knowledge to stand up and ask really difficult questions in public, and offer really challenging answers.

Join us in scenario planning for long-term climate change, and all the other ills that will amplify, with policy makers, business and communities. Help us make baselines for our bioregions, and measure progress or falling short in ways that we can grasp.

You know about so many examples of change that are already in progress. We need a way in which the models are widely shared, with their pluses and minuses, in just a few easily accessible websites.

There is another kind of wisdom or knowing that Aristotle neglected to mention and that is Sophia. In the Christian tradition, when God created the world, Sophia played by his side, delighting in all that was being created. Then as men became more vexatious she retreated up into the mountains.

She is deep wisdom, the kind that you only get by standing still and listening to what your heart mind and your gut are telling you. I heard her invoked in the words that preceded Trump’s inaugural speech. I guess the founding fathers reckoned they needed her on the streets. May she be with us all today as we move into action.

“Mother I feel you under my feet

Mother I feel your heart beat”

From “Heartbeat” album, by Irma

Isabel Carlisle leads the team for the Bioregional Learning Centre in South Devon. Current work includes creating a learning region rooted in place and community, a bioregional resilience strategy for sustainable economic and environmental futures in the face of climate change, and a charter for the River Dart. The emphasis is on engaging civil society to be an active player in 21st-century problem solving.

Following a long career in the London art world, Isabel set up and directed the Festival of Muslim Cultures that took place across Britain in 2006 as well as more than 120 events to bring audiences into contact with the Muslim world, to build bridges of understanding between cultures. In 2013 she co-founded the Community Chartering Network that played a role in bringing about the Scottish government ban on fracking. She has been a part of the Transition movement since 2008 until recently, including working with the Transition Network team as Education Coordinator. 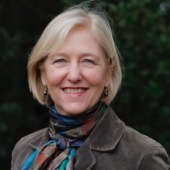